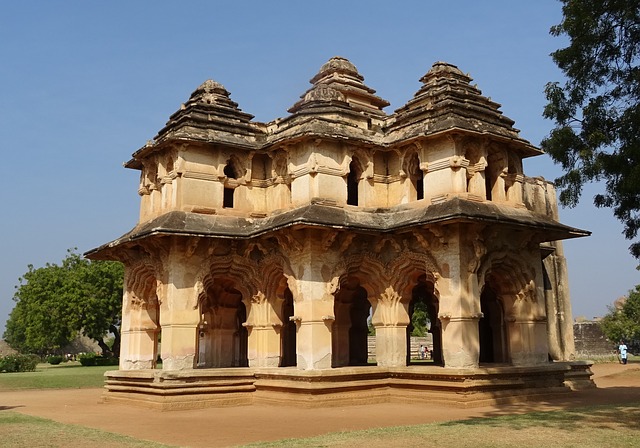 Vijayanagar (Vijayanagara) style of architecture came to existence in the 14th century AD and reached its zenith during times of Krishnadeva Raya and Achuta Deva. The architecture reflected the power of their rulers. Under them temples became an elaborate institution containing large number of structures.

The architecture can be divided into secular and religious buildings. The secular structures are generally Indo-Islamic in nature eg elephant stable has domes; Lotus mahal at Hampi has cusped arches and bracketed chhajjas – here the Hindu lintel of earlier period was replaced by pointed arches and circular domes. Among these plaster decoration is also common. The palace and court hall, as described by Abdur Razzak, were pillared halls (trabeat in conception) with platform for throne.

Among religious structures the antecedents can be traced to Hoysala style. It should be noted that though the styles of predecessors like later Chalukyas and Hoysalas was Vesara, Vijayanagar style is Dravida in conception. Features peculiar to Vijayanagar are –

» Pillars form an integral part of architecture – these are also elaborately decorated
» Pillars have ornamental brackets as capitals – this bracket is a pendant known as bodegai – this terminates in an inverted lotus band
» There are sculptures of huge animals & life size humans. Also, to the shaft is attached supernatural animal resembling horse or hippogryph
» Pavilions use reverse curved eaves at the cornice

Nearly 1250 temples of the region underwent major phase of expansion under Vijayanagar rule. In the temples, the Gopurams (temple entrances) were intricately carved and increased in height reaching upto 13 stories and, the pyramid structure was crowned with bronze kalasams. They also increased in number as each new ruler added one in his own glory. Ardha-mandaps (passage-ways, the earlier antarala) became large and contained exquisite sculptures & paintings. Mahamandaps (main hall) became huge containing upto 100 pillars. And, along with the Garbhagriha (sanctum- sanctorum), the Amman shrine (subsidiary shrine dedicated to consort of the chief deity) and Kalyan mandapa (hall for wedding ceremony of gods) became compulsory. The finest examples of Vijayanagar temples are the Vitthal Swamy and the Hazar Ramaswamy temples at Hampi.