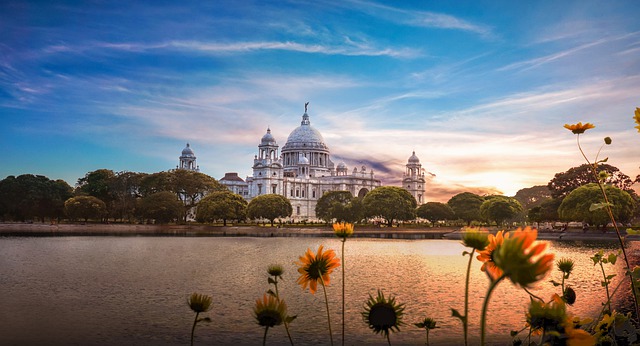 Recently we went to Calcutta. Apart from some works of importance, we decided that this time we would see the new face of Kokata. Kolkata, as Calcutta is now known is changing and for the good. It is developing both in terms of infrastructure as well as in terms of many newer things. While it can already boast of the very first metro rail (tube-rail) of India, now a days there is hectic development of flyovers to reduce the traffic congestion on the roads. Apart from that there are hectic construction activities relating to housing schemes that the city is witnessing.

However, our interests were different. A few days back, there was inaguration of Sourav’s The Food Pavilion restaurant at the Park Street (now called the Mother Teresa Sarani). This is a multicuisine restaurant of Sourav Ganguly who is currently the Captain of India’s cricket team. The restaurant is tucked away fifty meters inside the park street. It’s a big restaurant though not too sprawling, as one can guess, that on the most fashionable street of Kokata, there would be shortage of land space. However, the restaurant is well built with its four storey, impeccable cleanliness and friendly staff. The food is prepared by the chefs in the Kitchen that is open and adjacent to the sitting space. So one can see the chefs preparing the food. We ordered the chinese food, that included chicken, rice and noodle. In backdrop of piped spanish music, the food was hot and tasty. The food was served on square designed plates signed with Sourav’s signature. The food though a bit costly, was not too costly. The cost is easily competitive and comparable with the five star restaurants, but this one scores on the food as well as ambience. Our bill came to Rs. 505.

Our next stop was the Barista Coffee Shop which is again on the Park Street, quite close to Sourav’s. This is an Italian Coffee Shop Chain that has opened shop in different cities of India. Here the coffee and the bread/cake was extremely nice and tasty. We had coffee with caramel topped with cream (Rs 57 each cup) and walnut bread/cake (Rs 40) both were served hot. Madhu particularly liked the latter one very much.

Now it was time for some shopping, and we bought a bag from the pavement shops near the Grand. Thereafter we went to Gokul’s, which is a newly built mega mall for clothes in the Bhowanipur area. Here again we bought some clothes.

Thereafter it was again time for some food, as the Haldiram was just round the corner on the Chowringhee Road near the Elgin crossing / Rabindra Sadan Metro Station. As I had seen Haldiram earlier, this time it was quite different. It had grown big with nice sitting arrangement on two floors, and the cuisine seems to contain everything vegetarian from Indian, Chinese, Continental – from regular food to snacks. This was cheaper compared to others. However here we were more interested in chat, which is a spicy Indian snack delicacy and the tasty kesar jalebi.

Thereafter we took a walk to the Nehru Childrens’ Museum nearby that contains the Doll House. This contains the dolls from various countries and from the various different regions of India.

After that we took a longish walk to the Maidan. In the near-evening winter dusky sun the Maidan was full with people enjoying the holiday, and there were teeming children who were playing various different games from football to cricket. The nearby Victoria Memorial was full with people and the Birla Planetorium also seemed abuzz. We took a seat near the Maidan for some time and admired the beauty and the people in the vicinity, before it was time to catch the taxi for the Howrah station. Here I bought the fiction thriller by Dan Brown, The Da Vinci Code. I had read about this book that explores Christian religion, and in a way challenges the Roman Church in a mesh of fact and fiction.

We came back by the Coalfields Express, where again we had this nice appetite for food and we got the veg cutlet and fanta from the pantry car. This was topped by an extremely nice Baul Song (folk song of Bengal) by a performer who had boarded the train. We were back home by 9 pm.