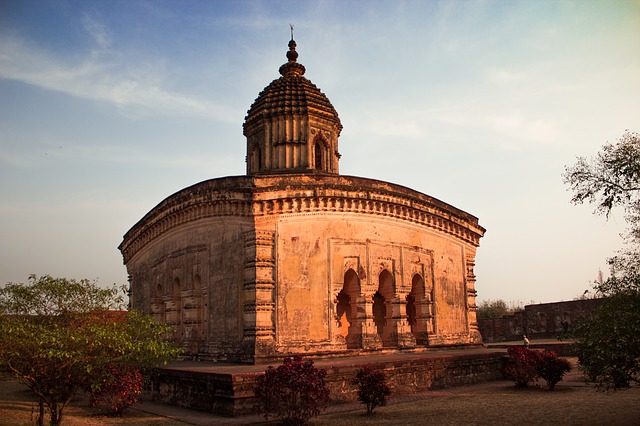 This Holiday season, we had various options. In first instance we wanted to go to Shantiniketan, but decided on Bishnupur. This is around 2 hours journey from Asansol by the Asansol-Haldia Express. This is a fully unresearved train and doesn’t require prior reservation. We boarded it at the Burnpur Station at 5.50 AM. The train has very few stoppage, and goes via Adra and Bankura.

Bishnupur is a small station. It is today a rural town with nearly sixty nine thousand population. The railway station also has a tree under which Ma Sarda used to rest during her journey to Kolkata, as mentioned in the plaque put alongside.

Apart from that, it is also famous for the Balucheri sarees, Tusser silk and Terracotta sculptures most prominently the Bishnupur Horse that forms its most famous export. During this time of December end, it also holds a Mela (winter fair) where one can find various objects of handicrafts and rural artisanry from different parts of Bengal.

Alighting from the train, we found that Bishnupur to be a small station with tracks on either side of a single platform. However it was broadguage and electrified! On the wintry Christmas morning of 2004, when we came out, we found that there were mostly rickshaws with hardly any taxi or auto-rickshaw available. Its understandable, however, its always useful as well as fun to go on a rickshaw particularly when one is on an outing. It helps to have a better view and sense of the place. The deal was struck at Rs 110. for showing all main places/monuments and leaving us at the Mela grounds.

Although I had read that the places are near to station, in reality its not so. All these places are dispersed at different locations, and given the condition of road, it takes time to reach these places. The rikshaw-wallah spoke of around two and half hours that would be needed to go through these places.

We started from the Madanmohan temple. The terracotta works are fine and minute and considering that they have survived the ravages of weather, are simply marvellous. Though these are temples, in reality it did not seem that they were used for religious purpose any longer. These are now protected monuments under the Archaeological Survey of India, and are more of tourist importance for their architecture and art work rather than for their religion. An interesting thing that we bought here was terracotta (sans conch) shell. This is just like conch shell in shape, but made of terracotta – and it really works ie. one can blow through it and it sounds just like conch shell.

From there on we went to the main area, as it seemed to me. This is the Rasamanch which is off college road and is a bustling tourist place with all sorts of shops selling the Bishnupur terracotta items as well as Saree shops. The Rasamanch is built on a platform with a pyramidal dome like structure. However the actual architectural beauty is inside where the various arched beams give a breathtaking view.

The silk shops here sell various items relating to tusser silks including sarees. The sarees are costly – upward of Rs 750 (uses single coloured thread), but better ones above Rs. 1500 (uses threads of different colours), some even Rs 5000 and above. One variety is Balucheri, and another variety is Swarnacheri (pronounced “sarnochoori” in Bengali). The difference is that the latter ones have golden threads used in addition to the usual threads – these are more costly. The terracotta shops sell all sizes of terracotta works including the famous Bishnupur Horse. I could spot at least four differently styled horses. One can even get such horses in wood work – however such woodwork are quite plain.

However one should keep in mind that the ticket one purchases at the Rasamanch entrance should not be thrown as the same ticket is used for entry to other two sites including the famous Jor Bangla.

The whole place is as such littered with the terracotta structures, some more famous than others, some plain while others ornately decorated. There are also secular structures like gateways etc. that one can see as one passes by on the road.

Seeing such various places, we finally reached the famous Jor Bangla. In some ways it is famous as it is considered the typical representation of the Bengal architecture. Obviously it was beautiful.

Just nearby was the Bishnupur Mela that was going on. However as it was around 11.30 AM, the Mela had not really started and the various shops were just beginning to make arrangement for the day that was to begin at 3 PM. The fair seemed to be typically rural in nature. However there were stalls from other parts of Bengal including Siuri (Birbhum). There were vairous stalls that were selling art works and trinkets including the sea-shell works, teracotta works and cloths, sweets etc. All this was apart from the stalls that had been put up by the Govt of West Bengal for promoting tourism etc.

The most interesting thing that we saw at the Mela was the stall that showed the process of silk making. Here the whole process was depicted in real things including the mulberry in pots with the silkworms eating away the leaves. I have never seen such big size of caterpillars, and we were informed that these were smaller ones that had been brought here. One could also see demo of how the silk is taken out from the pupa and also the machines used for it.

Thereafter we came back – taking the same rikshaw. On the way we saw the KG Engineering Institute (polytechnic estd. 1922). It has huge grounds where the students were playing cricket. On the way we stopped at the Tourist Guest House of the West Bengal Tourism Development Corporation (WBTDC). Seemingly there are no good restaurants at Bishnupur. The tourist guest house informed us that the only food available is plain rice (Rs 12) and either chicken (Rs 35) or fish curry. So we took the plain rice and chicken curry, both quite cheaply priced. The taste was fairly okay, though we missed the rice that we usually have, as the rice served here is the “boiled” variety, though it did not have that unsavoury smell that is usually associated with such rice.

One more thing I found – there were no ATMs there – so one should better keep cash, if one is set to do some serious buying.

We were back at railway station by1 PM. The rickshaw-wallah took Rs 170, and I didn’t argue with him as he had been patient with wherever we had told him to go or stop. Eventhough Rs 150 or Rs 160 would have been a more fair price, I was not quite in a mood to haggle over it.

The train to Adra was to come at 1.30 PM, though it came late by nearly half an hour. Our main concern after boarding the train was now to be able to reach Adra on time to catch the connecting train to Asansol, else we would have had to wait at Adra for another two to three hours for the next train. We just managed to catch that train (Purulia Bardhaman Passenger). We rounded up this journey with a nice cup of lemon tea that was quite tasty. We got off at Burnpur station and were back at home by around 5 PM.