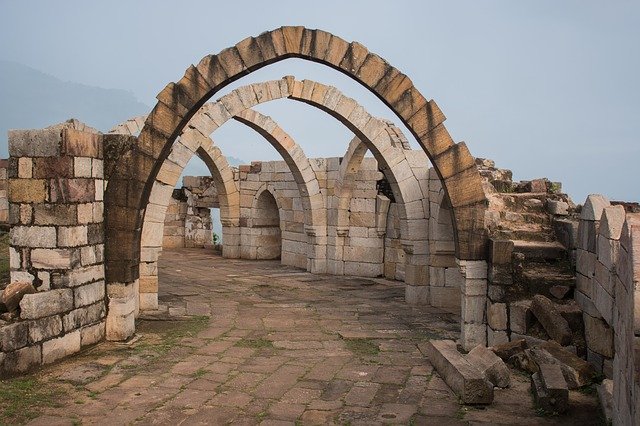 Sources forms the “fact” element of discipline of History. In History, the various sources are a continuous process of discovery and research. This is particularly true of Ancient periods when new archaeological findings tend to change our perceptions about those periods. There are various sources of ancient Indian history and the Historians have to collectively collaborate the evidence contained in them, to be able to reconstruct a rigorous history of those ancient times. Ancient Indian history sources can be classified into following sources:

Most of the ancient books have religious theme. Some of them deal with the time span as early as 2500 BC. However, the manuscripts that have come to us are not older than 4th cen AD. This is because, in those time, learning was oral, and knowledge used to pass as oral tradition from one generation to the next. Whenever these were put to written words, they have undergone revisions from time to time. Different commentators have put forth their own views.

Among the major religious texts are included the four Vedas, Purana (traditional history), Ramayan and Mahabharat. The Upanishads deal with time span of 1000-500 BC. Supplementary to Vedas were the Vedangs – which dealt with themes of – phonetic, rituals, grammar, etymology, metrics & astronomy. Rules of Sanskrit grammar was also written by Panini around 400BC.

Among the major books relating to the legal issues are the Arthshastras, which is a secular book, and the Dharmashastras, which can be called as a legal-religious book. Arthashastra deals with legal issues and issues of statecraft. Kautilya is considered to be the mastermind behind the establishment of Mauryan empire. The book contains details of public administration, and can even be considered a sort of manual for administration.

Dharmashastras in contrast are derived from Hindu philosophy and can be called both legal and socio-religious prescriptions for the king and the people. There were different authors to the Dharmashastras, the main authors include – Manu, Yangyavalka, Narad, and Brihaspati, among others. Kings were expected to rule according to the prescriptions contained in the Dharmashastras.

There were also works of literature written by writers of that time. These include literary works of Bhasa, Sudrak, Kalidas, Banabhatta etc. From the South we have Tamil sangam literature which is not religious in nature. Sangam literature are poems composed in praise of numerous heroes & heroines and includes exploits of local kings & chieftains. Sangam literature is important source for reconstructing socio-economic-political and commercial history of South India in early Christian centuries.

In this classification, are also the various literary works that deal with historical theme like the following:

However, these works cannot be said to stand the rigid test of modern day history. This is because, these works were written more as a praise for these rulers – some of them under their own patronage. Some of these writers were also employed by such rulers.

The only work that is usually regarded as trying to be impartial regarding recording of history is the Rajatarangini written by Kalhana. This is a historical text written during 1149-50 and deals with history of Kashmir. Its reliable part is considered to be – 7th cen AD onwards. This is written in verse. The approach is scientific – large number of sources & chronicles were consulted. He also laid down some general principles for writing it & abides by strict impartiality. The tradition of Kalhana was later imitated by Jonaraja & Srivara, Prajya Bhatt & Suka.

There were also some of the local chronicles that are available of the ruling dynasties in different parts of the country. Important among these chronicles includes the various Cronicles of Gujarat:

Archaeological sources are those sources where we focus on the physical remains. Often archaeological sources become most important for periods where we dont have the written word or any oral tradition, but have excavated resources. It is from these excavated artefacts that we deduct the socio-economic and political conditions of that time. This is a purely scientific work, and involves various scientific investigations including radio-carbon dating, anthropological investigations in to the skull types, medical investigation into the remains of human bodies, exhumation and study of buried corpse in the graves and so on.

As a generalisation, we can even say that where we have to rely solely on the archaeological resources, then that period is pre-historic, and not historical. In India, the pre-historic archaeological excavations have helped to find Harrapan civilisation and other cultures prior to it and contemporary to it. These includes excavation of mounds belonging to different cultures particularly in the western part of India (Gujarat & Rajasthan), though not limited to that only.

Analysis of pottery styles from Maharashtra and Northern India have helped to understand different cultures and they are clasified into the PGW (Painted Grey Ware), OCP (Ochre Coloured Pottery) and NBPW (Northern Black Polished Ware) cultures. From Kashmir also we have different burial styles. In South excavations have revealed existence of Megaliths which is spread in different parts of south India and often differentiated by the manner of burial.

Inscriptions are engravings on on stones & metals. One important advantage of inscriptions are that they are free from process of tampering. This is in contrast to the written books which have undergone considerable modifications over time. The inscriptions take precedence over the written words particularly in fixing of dates and collaborating evidence from the literary sources. Major examples of inscriptions include:

Early coins were punch marked coins and convey to us the then prevalent religious ideas & artistic conventions. However such coins do not supply any useful economic historical information. Coinage was revolutionised in India after the Greek invasion. These coins relate mostly to Graeko-Bactrian kings of North-West India. They added the Name & portrait of king and started minting coins in gold. This indicated improvement in economic conditions of that time. They also added the regnal year and images of God and their dynastic deity on the coins.

For coinage, metals like gold, silver & copper were used. Coins in form of currency were not just issued by the ruler, but could also be issued by merchant guilds & goldsmiths with the permission of the ruler. Coins have been the sole source of information regarding the Greeks, Sakas & Parthians and their rule in India. Malva, Yaudheya & Mitras (of Panchalas) are also known exclusively because of thieir coins. Guptas issued the largest number of gold coins. With downfall of Guptas, the numismatic evidence ceases to be of importance. Coins of Harsha, Chalukyas, Rashtrakutas, Pratiharas & Palas are not well known and of little significance.

Monuments are important to understand various issues relating to building architecture, building materials used, design and construction technology etc. For early India, monuments are not the ones like we find in the medieval times (forts, mausoleums etc.), but are found more from the archaeological remains. This is because firstly much of the construction used to be with the woods, which have perished with time, and secondly many of such remains have been destroyed by those who won wars with the particular settlers or kingdoms.

The important ones are monument remains of Harappan civilisation from which historians have made deductions relating to their religious and political and social conditions. Then we have the artefacts on the pictorial tablets of Harappans, and those in the Asokan edict. Then we have the Stupas & temples that help to understand architecture, social & educational life of people. This is particularly useful from places like Sanchi & Bharhut stupas that reveal existence of trade guilds, trade routes, people belonging to different professions who would visit these stupas etc.

Similarly South Indian temples reveals the social life of people & role that temples played in lives of people. Unfortunately, palaces belonging to ancient times have not been found as most of them have perished with time as they were built with wood.

Travellers and ambassadors from foreign countries have left their accounts of their travel to India. Many of these in their original form have been lost. But we know about these sources and their observations as contemporary or later authors of those times, whose books have survived have quoted from such sources. Prime among these sources are the Greek accounts.

The earliest references of India are made by Herodotus & Ctesias. Then we have the accounts of Greeks who accompanied Alexander on his world conquest and reached till India eg. Nearchus Onesicritus etc. Among later Greek authors who have written regarding India are Strabo, Justin, Arrian, Plutarch etc. The most important of the Greek records relate to the ambassadors who were posted to India and who have written things with personal observation. These include Greek ambassadors like Megasthenes (Indica), Deimachus, and Dionysius. However even here we need to observe some caution to filter the fantastic things recorded in such documents.

From these accounts we get some details of the maritime activity and overseas trade of those times. We also find the description of seaports of India in use at those times. These accounts were more related to adventure and exploration of coming into interaction with a foreign country and reflects scientific spirit of authors. This seems quite in tune with similar outlook in accounts of arab sailors, a few centuries later like the account of Sulaiman and Al Masudi.

Another segment of the foreign travellers came from China. Most important of these are the account left by Chinese travellers like Fa Hien (of the Gupta time), Hieun Tsang (during the reign of Harshavardhan), and Itsing later on. These records are largely religious, particularly relating to Buddhism. This is quite natural, as these travellers had come to India to seek greater knowledge regarding Buddhism and take that knowledge to their own country. However, Hieun Tsang also records secular and social life of the people.

From 8th cenury onwards, India attracted Arab writers. Most famous being Al Beruni (Abu Rihan) who came with entourage of Mahmud Ghazni. His writing is considered to be most scientific-critical-rational account of society of that period. But he says nothing of political conditions of that time. However his account is also influenced by his study of the Indian literature.