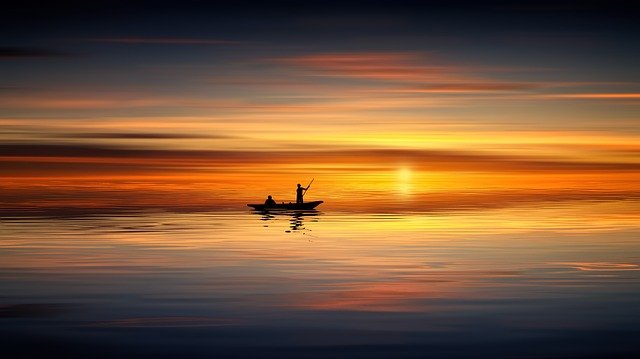 The March month is not really a nice month to travel – the beginning of summer heat starts getting you. However given our schedule, we squeezed out two days, where we could go out on excursion. Our choice was ISKCON (International Society for Krishna Consciousness) temple at Mayapur.

Mayapur is situated in Nawadwip. Nawadwip is around 5 hours journey from Asansol by Bus. Perhaps the run time may be even about 3 hours if one goes by ones car. However Bus journey has its own charm and tribulations.

We were to start from Asansol at 7.30 AM, at which time bus starts for Nawadwip. However, we woke up later than sceduled and did not have the mood to go at the morning. Later on the day we decided that we should go, lest we miss the opportunity to see the holy place. So we again searched our heads, and remembered that a bus starts for Nawadwhip at 11 AM. So we were finally on the move.

Journey till Bardhhaman (previously Burdwan) was quite good. Till Durgapur, it takes around one hour, and another one and half hour onwards is Bardhhaman. We had ‘working’ lunch there from one of the ‘dhabas’ near the bus stand by name Krishna Hotel. We were particularly attracted by its fine thin rotis. The roti sabzi fare was quite good.

Bardhhaman has a very busy bus stand, and most of the time the road is fairly jammed with the incoming and outgoing buses. It took nearly one hour from entry to exit at Bardhhaman itself!

While till Durgapur area, the whole landscape is filled with factories and air filled with pollution. The moment one enters the Bardhhaman area and onwards, one is exposed to the breathtaking greenry of the agrarian fields. It is not only soothing to the eyes, but wonderful to see greenry till the end of the horizon… and even beyond.

The bus finally reached the bus stop of Nabadwip at around 4.25 PM. As we were unaware of where Mayapur was – or how far it was from the Nabadwip bus stand – we started asking the few people who were around. Even at such hours of evening, the place starts to get longer sun shadows – seemingly, the sun sets faster in that area. We finally boarded a rickshaw, who took us to the Ganges Ghat. This distance is not as short as people would like to make out – particularly after the bus journey – there is no inclination to walk.

So finally we reached the Ghat – where we boarded a ferry – which seemed dangerous at first due to its weary condition. The charges are Rs. 1.25 per person! There were many people on that – and when it was filled to the full, it started at its slow pace and making a parabolic curve reached what seemed to be an island on the other side of the huge Ganges river. On the other side was standing a bus to Krishnanagar, which we boarded. After nearly half an hour it started – often giving us bit of jitters, when we thought, how far this Mayapur may be, as Sun had already crossed the horizon and whatever sky light was there was due to twilight.

However, the bus started at its slow pace, and mybe a kilometer later brought us to the stop in front of Mayapur. It was such a relief – but even grander was the sight and view of the place. Also the place was so peaceful. We hurried to the Gada bhawan (residential arrangement inside the temple premises), where we were happy to find ourselves room without any prior reservation. (We were mentally prepared to stay at outside lodges, if accomodation were not available inside). The room rentals ranged from Rs. 250 upto Rs. 3000 per day. We prefered a room with rental of Rs. 500 (it had Geyser, and Mayapur is pretty cool in evenings). It must be said that the room was spotless clean and arrangements much better than the hotels in big cities.

After keeping the baggage, we rushed for the evening Arti, as it was about to start.

All the programmes of the Mayapur temple are pre fixed and pre timed and one gets the programme sheet at the Gada bhawan itself. Also one has to get the coupon for meals at the earliest, as the servings are done in batches and finishes early.

It was quite a pleasure to see so many foreigners who were followers of Lord Krishna. And many foreign ladies and also their children were wearing the sari and the Gopi Dress. It is really a pleasure to see that how peaceful embracement of devotion can be compared to the cacophony of hinduism one listens everyday in the national politics. More interesting is, that those who become followers of Lord Krishna, and take up Vaishnavism, they have to give up eating non veg food, and also follow simple food habits and living style. One is unconsiously reminded of Gandhiji, who was one of the famous Vaishnavs. 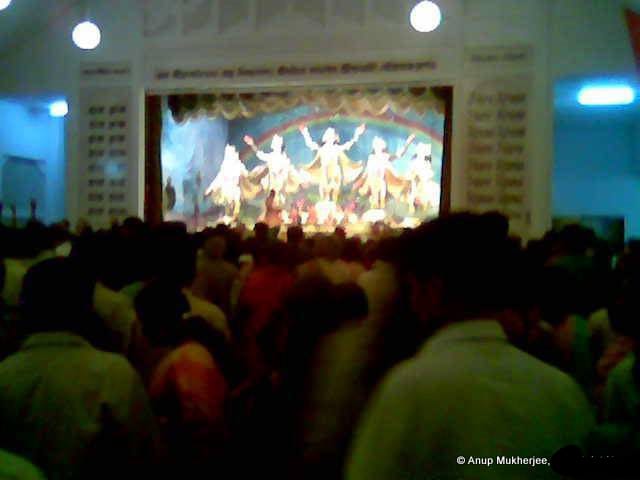 The evening Arti was a huge affair with circumambulation of the three alters where the deities have been put up. And thereafter the arti started with full flow. That can only be experienced, rather than explained. It is a huge congregation of devotion fully immersed in song and dance in the happiness of the lord. The wordings of the Bhajan and Song is simply – “Hare Krishna, hare Krishna, Krishna Krishna Hare Hare. Hare Rama, hare Rama, Rama Rama Hare Hare”. The whole atmosphere gets so much charged up that every one gets wide eyed and as if transformed into a natural participant of the devotional mileu. Its an experience in itself.

Though photography is banned, one could easily see flashes and use of mobile camera within the temple. 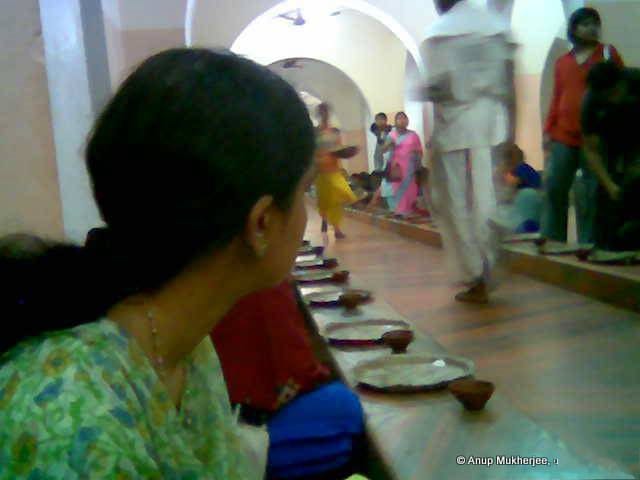 After the Arti, which continued for nearly more than an hour and half, we went for the dinner, for which we were were hungry already. The food was simple – papad, Puri, Plain Rice, Dal and potato vegetable. These were devoid of masalas. The seating arrangement was on a row, and in front was a raised platform, where one could keep ones leaf plate.

After that we came out on the road to have a stroll so as to see what it is outside. It was a sleepy village type setting with many lodges, dhabas, sweetshops and staying places – dorms, rooms, etc managed privately.

A good redeeming feature – which was quite unexpected at that remote place was existence of UTI Bank (now Axis Bank) ATM inside the premises of Mayapur temple.

We came back – had a good sleep – woke up in the morning – the heat was tremendous. We attended the morning arti. One had to purchase prasad at nominal cost. The prasad included cakes, pizzas, among others. 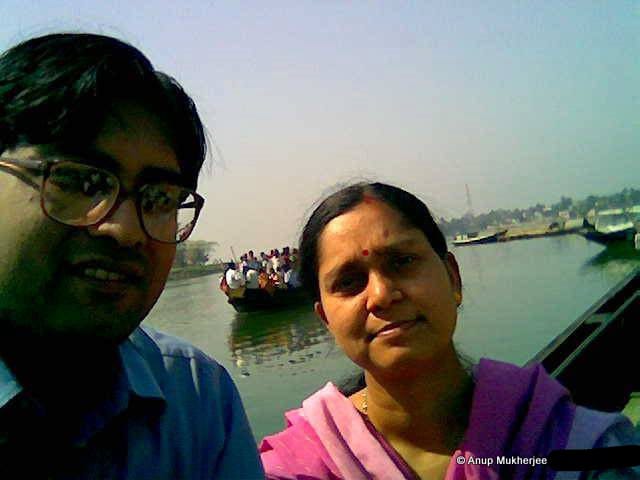 Since we were on a hectic trip squeezing the weekend for the excursion, we did not have much time to look other things. We took our way back. Crossing the Ganges, we had brief brunch at a Nabadweep hotel. Thereafter took a rickshaw to the Bus Stand. Going through the road, we saw glimpses of Nabadweep – some of the temples, the town market etc. What was quite visible was that the sleepy town was heavily influenced by the Victorian style architecture.

Sometime during afternoon we caught the Bus back to Bardhamman. At Bardhamman we bought the famous Sitabhog and Mihidana. Bardhamman is filled with these shops on the road near the Bus Stand and the Railway station. Also there are many Dhabas catering to all tastes on this road – which happens to be a fork of the main GT Road.

After a quick lunch at Bardhamman, we took another connecting Bus to Asansol. We were back at home by 6 PM. The whole trip had taken around 30 hours!