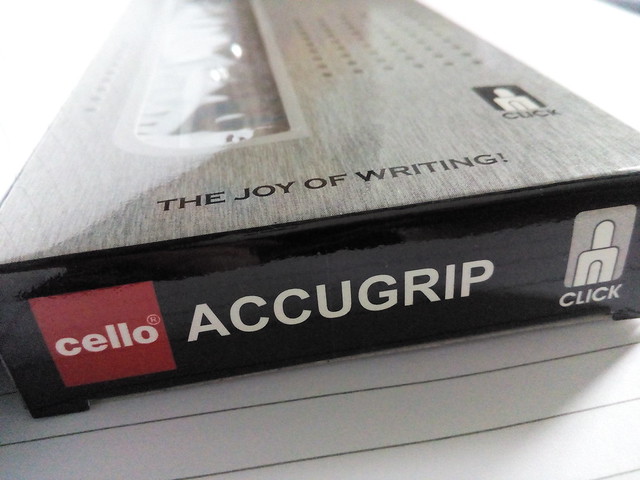 Three years back, I used to write with ball point pens. Yes, I loved writing with them. However I found that there used to be extra pressure that I had to put in using those pens. Also, the refill width were neither consistent nor the ink colour or hue/shade were great to look at. They were at times very dark, which I did not like. There were other important reasons also:

2) The metal ball point pens were heavy and the refills for them – usually jotter type – or even others lacked the desired smoothness and often had a drag in writing.

So usually I used to buy a roller ball pen and swap the refill to a ball point refill. That way it saved me the gripper. But all this was not satisfying.

Among the Gel pens, the only pen that I really liked was the Flair Writometer. That was more because of the refill – the pen body was not at all inspiring. (the Writometer as such, comes both in ball point and gel refill). However, even in Writometer, the required colour gel refill (ie black colour) was not to be found in my city. Also, the blue in gel refills look more like a blue-black ink colour.

Though I have various roller ball pens, I never got comfortable with them to use them for over a day – or even less than a day. All the roller balls, I have found to have very dark ink colour – and also they have bleed through effect – ie. the ink becomes visible on the other side of paper.

Similar was the problem with liquid ink pens. I really liked the concept of the liquid ink pens but all of them had highly saturated ink and would blot if kept at a point on paper. Besides the bleed through was terrible. The only exception I found was the Reynolds Tekpoint. I loved its blue ink colour – it has a sky blue shade which looks really lovely and the writing looked as if written with a fountain pen.

Gradually, I moved over to the fountain pen – the variety was enticing and the lure compelling. I experimented with different nib types, different FPs and different inks – including the most important for me the water resistance of ink used.

But I also kept on searching for a good ballpoint – in the process purchasing various brands – like Parker, Sheaffer, Pilot etc. Till this day I was using Pilot as my ball point pen. 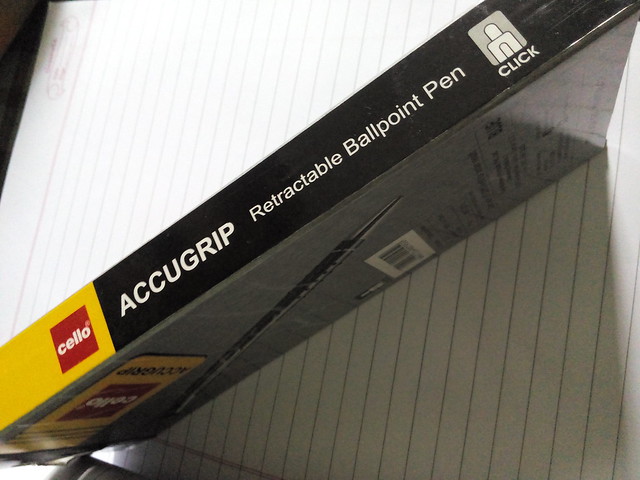 Today when I went to the local stationery shop, I found a new pen Cello Accugrip. Initially it seemed to be another of those plastic pen with shiny covering. One is always skeptical at the kind of tricks pen manufacturers may play. I just test wrote it, and was highly impressed – it gave an impression as if it was a gel pen. But on all these I was wrong. It is a ball point pen, and it has a metal body. 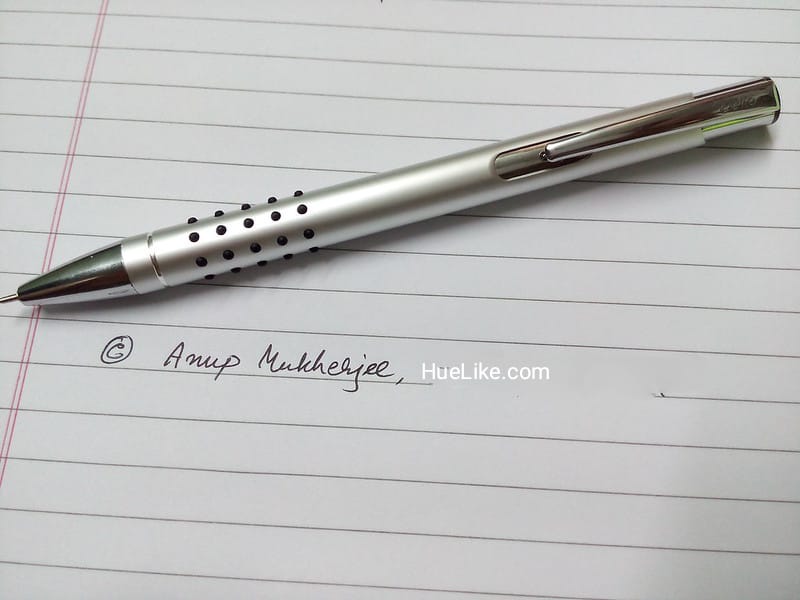 The metal finish is highly glossy and smooth. The pen is highly stylish (though I am not sure if the rubber dots are original design – but who cares?). The rubber dots in a sense blend with the pen – and creates no distraction. In my view, it also adds a good sense of purpose to the pen – that it wont slip off or roll off just like that. And being located on a bit higher side, they are not interfering with the grip.

The size of the pen is also good as can be seen in the comparative image (below). The section width is also good. Unlike other ball points that have small diameter section or the length of the pens are small, this one stands out from the crowd. 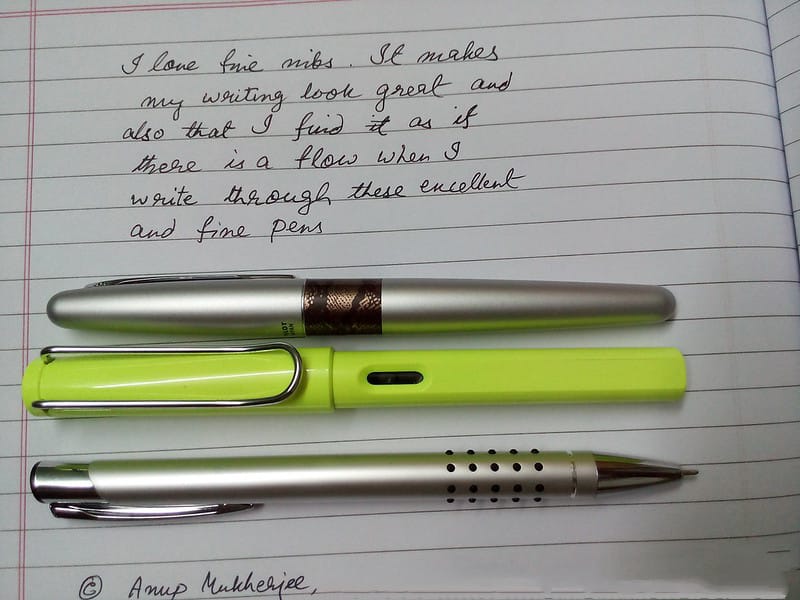 (The above para has been written using the three pens Pilot MR Fine, Lamy Safari EF, and Cello Accugrip – can you distinguish which part is written with ball pen?) – here is a closeup – 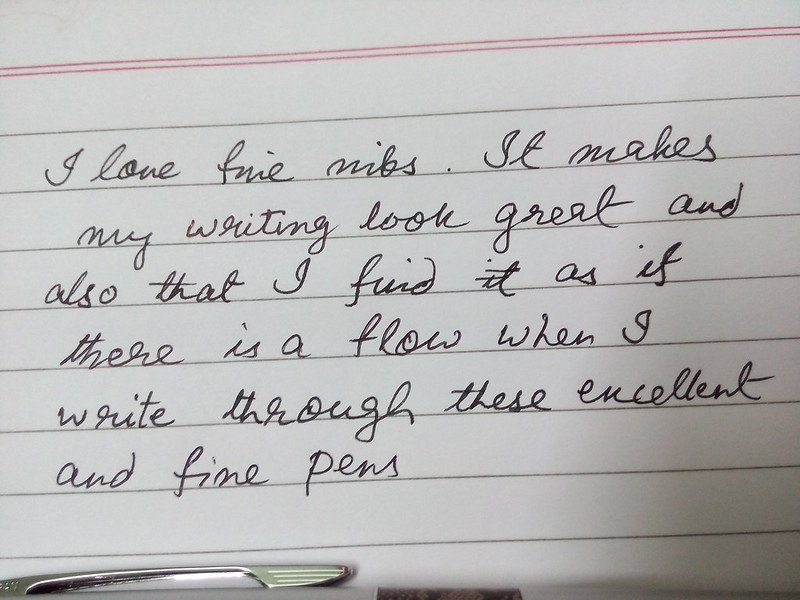 The refill even though a ball point is highly smooth – just as smooth – or even more smoother than a very smooth fountain pen. The line width is fine or extra fine (depending on what protocol you use) – and I love the fine nib points.

The weight of pen, despite being metal is very light (though one can well say its not as light as plastic) and is extremely well balanced. The refill is just fantastic and absolutely does not require any pressure. And everything is simply perfect about it. And needless to say – good pens deserve to be spoken about, and I could not stop myself from praising it.

Its an Indian pen with MRP of Rs. 60, which I got with a 10% discount at my local shop! The pen comes in gloss silver and gloss black finish. The refills are available in both blue and black colours.

Pen is a personal preference, and my opinion on this pen is that it’s a pen that beats them all !

And, if you are still wondering as to which part is written with the Cello Accugrip ball pen, then the part in red brackets is written with it (third and fifth line with Pilot, rest with Lamy)- 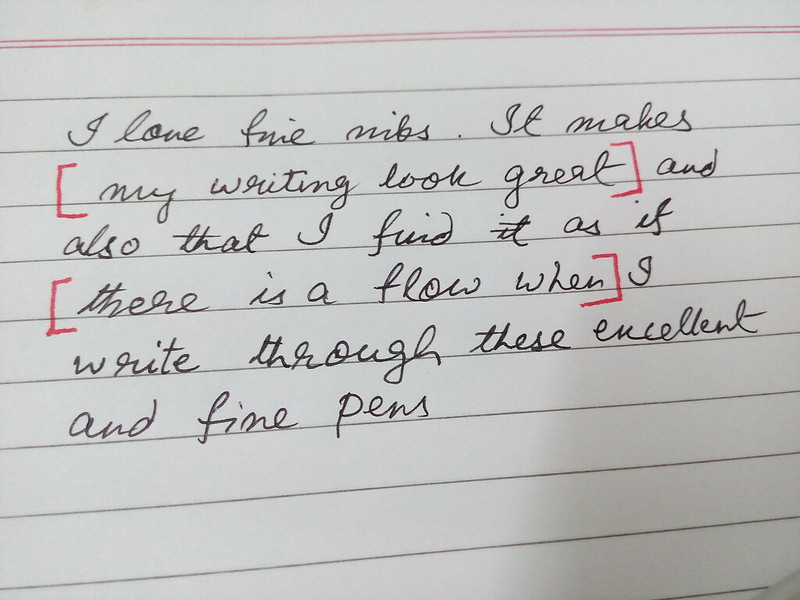