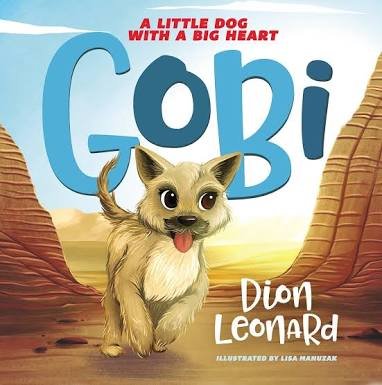 Gobi: A little Dog with a Big Heart by Dion Leonard, Illustrated by Lisa Manuzak

I got this picture book from Netgalley.

In times, when humans are still adversaries with each other on petty considerations like color of skin or choice of God and religion, this is a cute, and heart-warming story of bonding between a human being and an unknown stray dog, in a rugged terrain.

This is a real story that happened in the Gobi desert across China in the year 2016.

The ultramarathon runner Dion Leonard, an Australian who lives in Scotland was participating in one of the toughest marathons – the one across the Gobi desert. During this time, a cute dog started to trail him. It was a little dog.

Initially, the ultramarathon runner thought, that this was just going to last a little distance. But, the dog was persistent in its resolve. It followed him for the first 77 miles of the 155 mile race, after which he handed over the dog to an organizer as the terrain would become more harsh. During the period of running together, a bond developed between the runner and the dog. So, he would let the dog sleep with him in the tent, and in absence of any vessel, even making a cup of his palm and make it drink water from there. He named the dog Gobi, after the desert where he found it.

The full story is fascinating and much vast and goes beyond the race in the desert. It was all over the media in 2016, and is also available through various videos on YouTube.

Dion has written a book on this by the title “Finding Gobi”. This picture book is for small kids and is authored by him.

The time range of book relates to the run in the desert. The text tells the story very well, including what Gobi, the dog, might be thinking. The illustrations, match the tough terrain and the ruggedness of the desert. From the very start, the theme of the desert has been brought out starkly. Overall, the illustrations have been done well and brings out the essence of the run.