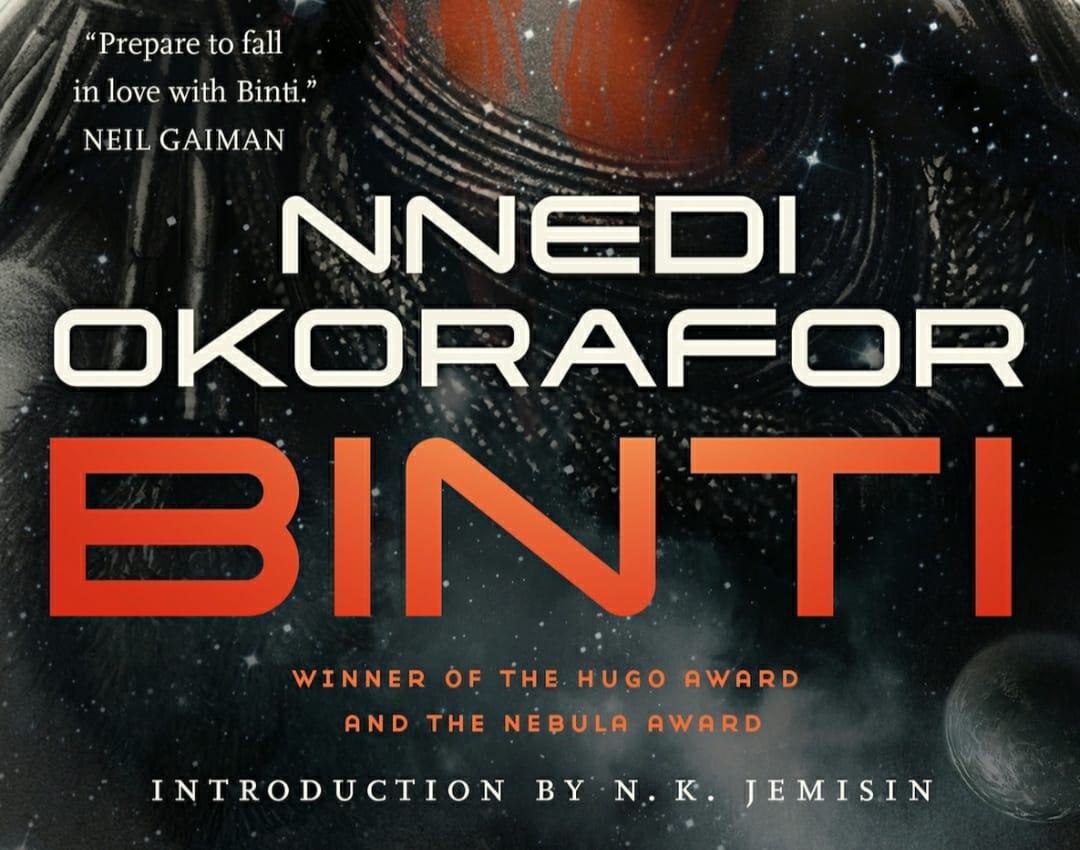 Nnedi Okorafor is an ethnic Nigerian and holds a PhD in English from the University of Illinois, Chicago. This book of her’s is a short book of about 100 pages. This Novella has won the Nebula Award and the Hugo Award. The author has used the traditions of the ethnic Himba people of Namibia that include braiding of hair and veneering their body with clay and red ochre obtained locally. Hair and soil form the thematic setting for tradition in a futuristic world.

The story is a simple one. It is about a girl, Binti, whose family / ethnic group do not leave their homeland. But, this girl gets accepted to university and the prejudices and impediments she has to overcome in her journey to join the university.

This story line has been woven in an extraordinary manner. Using the African tradition, and the setting of the lands of middle east, the author has woven a high fantasy in a futuristic world, where there is a place of tradition not just coexisting with high technology, but even playing an important role in social/galactic interactions.

Binti leaves her home secretly against the wishes of her family. She wants to study in the Oomza university that exists in another planet. “I had scored so high on the planetary exams in mathematics that the Oomza university had not only admitted me, but promised to pay for whatever I needed in order to attend.” In her traditional setting she would be an eligible bride, but going to a university in another planet would make it zero, because her people don’t leave the native land. During her travel she has to face prejudice from Khoush people for her looks.

In our twenty first century world, women still have to face traditional prejudices and stereotypes. In such setting a girl from a remote place going to study higher mathematics in university at a distant place, all alone, sets the much needed social message.

Some of the fantastic elements are the astrolabe, which is a mechanical instruments, but looks more like a futuristic horoscope that accurately tells about the past and future. Perhaps element of destiny is built into the story, when the author uses such a concept. The transport ship, which is a Fish, is a “living technology”. The ship in which Binti travels is closely related to shrimp that “were genetically enhanced to grow three breathing chambers within their bodies”, which were enormous rooms. During travel the ship gets attacked by aliens called Meduse, who have their own reason for the attack. Binti is the only surviving traveller. The Meduse are transparent, a concept taken most likely from jelly fish, whom the author mentions in acknowledgement. (Scientific name of jelly fish is: Medusozoa)

I won’t go into the details, as this is a very small story. But one element of writing that stands out is the concept of harmonizer. This word “Harmonizer” has been used in different senses at different places in the book. At one place it is directly related to Binti’s ability to build astrolabe. At another place we are informed “…I had become master harmonizer by the age of twelve. I could communicate with spirit flow, and convince them to become one current”. At the level of story, the Harmonizer is not about fighting and winning, but understanding and reconciliation. It is like a seekers journey, who when faced with danger and dire situation of survival, is not filled with hate (fight) or despair (flight). Despite of many lurking fears, Binti talks, negotiates, and works out amicable solutions. Despite of troubles, its a constructive process which is not just coming of age by realization of the ways of outside world, but also evolving to a higher level of thought.

Binti was originally published in 2015. The author has also written sequel to this: (1) Binti: Home and (2) Binti: The Night Masquerade, both 2017