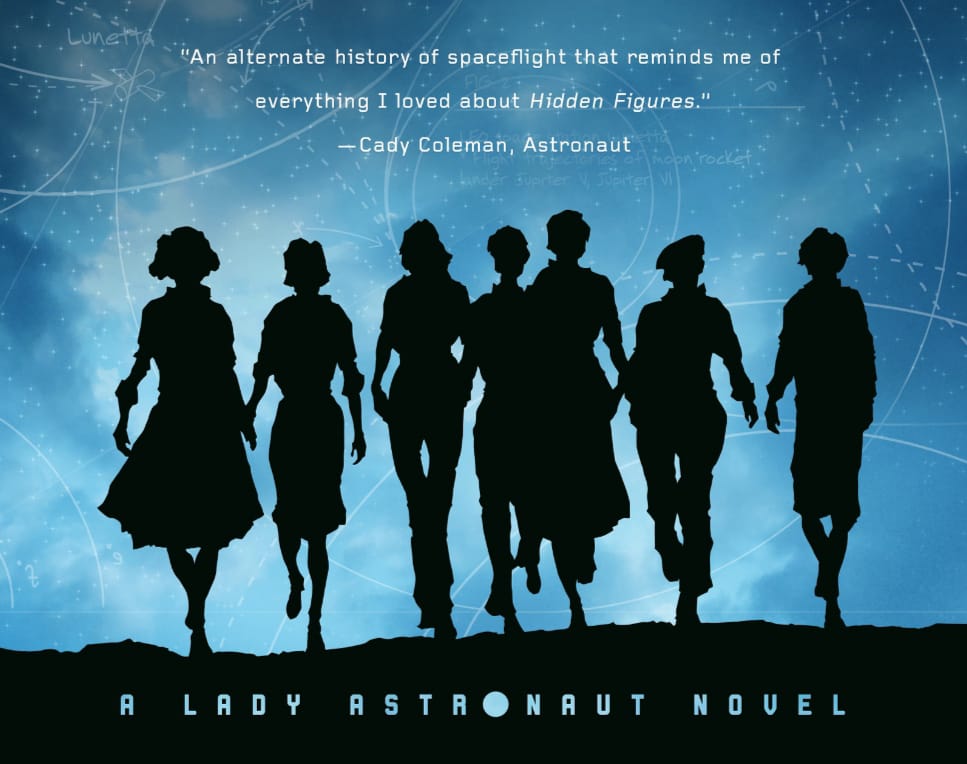 The Calculating Stars is the winner of Hugo Award 2019 in the novel category, and has also won other literary awards. It is written by Mary Robinette Kowal, a distinguished and multi award winner SFF writer and puppeteer. The origin of this book is in the novelette “The Lady Astronaut of Mars,” which can be read here on Tor site https://www.tor.com/2013/09/11/the-lady-astronaut-of-mars/

The Calculating Stars, acts as a prequel to that story.

This is an alternate history story, a subgenre under the umbrella of Science Fiction/Fantasy. The author uses the technique of alternate history in a brilliant manner to commence the story that progresses to be a triumph of women over the discrimination faced by them in the space exploration sector of real history. That the story concerns a woman pilot who aims to be an astronaut adds to the thrill.

If the book can be summed up in one sentence, it would be a quote from the book,

“I was a physicist and a computer and a pilot, not a pinup girl.”

This very well sums up the attitude and storyline of Elma York, the main character, who narrates the story in first person. It is indeed sad that women, who have skill and knowledge, even in 21st century, often come to limelight not for their competence but for their appearance, besides being overlooked for awards and positions, just because they are woman and so would not able to handle ‘tough’ situations. That way, the book is not just a mirror of the times of mid 20th century, but also a critique of our times. (I can relate to the story in many ways because my wife happens to be an engineer in telecom and the professional struggles she endured.)

The story employs the technical milieu in a realistic manner. Some of the things may look like technical jargon, but those are of real science, and not the imagined variety that we see in television series like ‘Flash.’ So, in some ways, it keeps the story grounded, and those who want to see ‘real science’ in science fiction would find this a great read. Though it may be remembered, that this science fiction story is an SF story because of alternate history, and not because of the science.

Alternate history is often about extension of the existing situations in an imagined time-frame/future. The shift in timeline can be because of certain event that can change the course of history, the what-if. If Philip Dick used the alternate history in his “The Man in High Castle,” to create a dystopia, Kowal employs the technique in a positive manner for empowerment of women. And in this, the author brings forth the hidden real stories, that did not get the limelight in the usual ‘his’tory, in the post WWII world. That there were many women pilots who served the Airforce in US, the WASPs (Women Airforce Service Pilots), that women trained to be astronauts, and excelled in their training, but were denied by alteration of eligibility criteria during the early era of space exploration. Also, that the main protagonist is a Jew adds to the milieu of her marginalization.

Those who liked “Hidden Figures” by Margot Lee Shetterly, which was a nonfiction, this book is a broader take on the women as a whole, employing the tools and opportunities that fiction provides to writers.

The acknowledgement section shows the research that went into this book, but the section that should not be missed is the “Historical Note,” which gives a great insight to the real history and the author’s explanation to the whys of the choices she made in playing around with real timeline in writing this book.

You can find the author read an extract from the sequel, “The Fated Sky,” and also talk about, “The Calculating Stars” at Google Talks