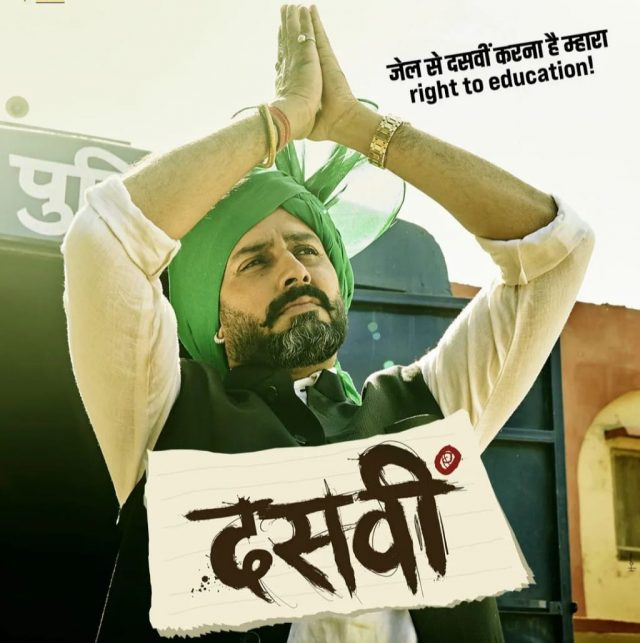 Dasvi movie is a Bollywood social and political satire and represents many elements of today’s reality in the country. The movie is available on Netflix. The protagonist is a politician who has not even passed class 10th, but has been elected to become the Chief Minister of the Harit Pradesh. However, because of past corruption charges he is sent to prison.

Meanwhile he makes his wife the Chief Minister of the state to rule in his absence. Interestingly, his wife gets a taste of power and wants her husband to remain in prison so that she can continue to rule the state.

In the prison he comes in contact with the woman superintendent who is strict and would not tolerate any laxity on part of prisoners. Only those prisoners who are studying for some exam are exempt from work in prison. To escape the rigorous work, the protagonist schemes to appear for the class 10 exams. He may have political power even from within the prison, but one thing that he does not have is education, and through various interactions with the woman superintendent, he even vows that he won’t hold political office after bail if he does not pass class 10 exam.

Using satire, the movie takes subtle digs at the current political system and brings in the hilarity factor. After all, that is the only thing people of this country can do when many unqualified and unsuitable people hold the highest elected offices in the country. It shows how the country is being run and why there are so many systemic wrongs that exist. The movie portrays this in an excellent manner.

For that matter, some of the scenes did happen in this country in reality!

In a way, this movie portrays the ideals and the aspirations of people to have better and educated leaders in the country. Besides, the importance of education for an individual is also emphasized as it makes them a better person. It is also a commentary on the system that the country despite having guaranteed the right to education, still continues to have illiteracy rate of nearly 25% in the country, and the education network of schools lack important infrastructure like class-rooms, and good teachers.

Bollywood has been making movies of social themes since its inception. The nature of these themes have evolved to reflect the issues of those times. On education itself there have been movies like English-Vinglish, Paathshala, Three Idiots, Taare Zameen Par and many others. These are part of the broader social/social-satire movies that encompass many other issues apart from education – like the sanitary pads for women, use of toilet, among others.

This is definitely an excellent movie to watch. The performance of Abhishek Bachchhan reminded me of his rowdy role in the movie – Yuva where he played the villain in a rather excellent manner. That movie had a theme of political + romance, this one, Dasvi, is socio-political + satire.

Overall, an excellent movie to watch.